How I see the abortion issue

I know women who have had abortions and men who’ve paid for them.  The vast majority of them have become pro-Life and struggle restlessly with their decision to either end or facilitate the end of their pre-born child’s life. The tragedy they live with daily is heartbreaking.

In a society predominated by a culture of death, that pushes women to have an abortion, presenting them with stark, life ruining alternatives to killing their pre-born children, I think it’s important to say I do not condemn the women who’ve done so, unless they’re among the depraved ones who’ve either celebrated causing their child’s death or advocate women celebrate their abortion the way women have baby showers.  (See links below.)  I pray that they might be able to forgive themselves and find peace. 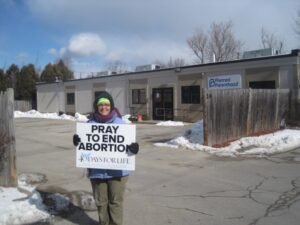 The abortion clinic in the heart of Manchester.

In light of the Supreme Court’s June 24, 2022 decision overturning Roe v. Wade, the Biden Administration has not only aggressively sought to discredit the court, it has pushed to somehow undermine the decision, including the use presidential executive orders.  Despite the narrative from the Democrat party, abortionists and the media, the Supreme Court did not ban abortion.  It simply, and correctly, said there was no right to an abortion to be found in the Constitution and that, under the Tenth Amendment, it’s a matter for each state to decide through their elected representatives.

I agree with this decision and, no doubt, will be called upon to vote on the issue as a senator.  Here’s what I will do and won’t do, along with some facts about the abortion industry in our state.

First, you should know that abortion providers are completely unregulated in New Hampshire.  In New Hampshire, a license is required to operate a nail salon or a barber shop, but not an abortion clinic.  Unlike any other medical facility in our state, abortion clinics have no licensing requirement, no state inspection requirement and no state oversight.  With one of the state’s biggest Planned Parenthood abortion clinics in Senate District 20, at the corner of Elm and Pennacook streets, I will vote to change this to ensure the health and safety of all who use that facility.

Recently, the state passed a law banning abortion in the last three months.  This “late term abortion ban” is our state’s only restriction on abortion.  Opponents of the ban argued that it was unnecessary because so few are conducted in NH.  The trouble with that statement is that there is no way to know whether or not that’s true because New Hampshire does not collect any data on abortion procedures the way it does with other surgical procedures. This needs to change and I will support reporting requirements.

The pro-abortion lobby has fiercely fought and successfully defeated any attempt to regulate clinics or collect data on abortions done in our state.  One would think that if they truly wanted abortion to be safe and prove their claims about when abortions are done, what procedures are or aren’t used and the demographics of who is having them done, they would welcome legislation that provided the kind of oversight and transparency that other medical facilities and procedures are subject to.

Those who support unrestricted abortion on demand also want you to believe that most everybody agrees with them.  Headlines shout “70% of Americans are pro-Choice.”  One doesn’t have to dig too deeply into those polls to see that substantial percentages of Americans believe that abortion should be subject to very real and meaningful restrictions.  (See poll links below.). While New Hampshire now bans abortion after 6 months, with exemptions for the mother’s life or a “fetal anomaly incompatible with life outside the womb,” and does have a parental notification law, abortion is otherwise completely unrestricted.

Because I believe (and science agrees) that the child in the womb is an independent, individual life that is distinct and different from the mother, I believe that child has a right to live, to see the light of day, to take its first breath and have a chance to become whatever it can make of itself.  Therefore, I will support protections that save the lives of more pre-born children.  In addition, I will seek to support women for whom the pregnancy is a “crisis,” for whatever reason.  Senate District 20 is home to two of our state’s premiere crisis pregnancy centers, the Pennacook Pregnancy Center and RealOptions.  Both are affiliated with CareNet.  Rather than funding abortion clinics that exterminate innocent life, I’d like to look instead at funding crisis pregnancy centers that supportively nurture mothers and pre-born children and their families during difficult times.

We also need to examine how to enlarge and invigorate adoption for those women and families who do not want, or are not able, to raise the child.  Abortion advocates often push young women hard on how their future will be irreparably damaged by having a child.  Maybe the women are single, or in their teens, or haven’t finished school.  Maybe they’re poor or disabled and cannot financially or physically care for a child.  Maybe…Whatever the concern, there are thousands of couples in our state who want to adopt babies but can’t find any to adopt.  We need to make sure pregnant women know it is an option and understand how it works so they are enabled to give birth to their child without imposing on that future they believe they cannot otherwise have.  Let’s look at our adoption laws to see how we can better facilitate giving the gift of life.

Woman who holds record for most abortions celebrate her 100th abortion …

‘It’s Aborted’: Woman Celebrates Her Abortion With Cake And Party …

Abortion Activist: We Should Celebrate Abortions Like We Celebrate Babies With Baby Showers

Harvard Poll: 72% of Voters Want Tough Abortion Restrictions in Their …

71 Percent Of Americans Want More Restrictions On Abortion, Not Fewer