The assault on crisis pregnancy centers

In what can only be termed a bizarre consequence of the Supreme Court’s decision to overturn Roe v. Wade, pro-abortion politicians here in New Hampshire and across the nation have attacked, of all things, crisis pregnancy centers.  The centers, which provide support and assistance to women and families in crisis during pregnancy, have especially drawn the ire of Senator Elizabeth Warren (D-MA) who recently told NBC 10 Boston:

She’s sponsored legislation that would effectively shut them down across the nation. 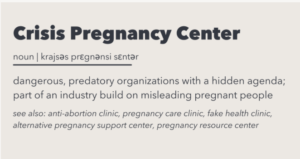 Abortion provider Planned Parenthood has also attacked the centers in the weeks following Roe’s overturning, as the graphic at left shows.  It considers them “predatory organizations and a risk to public health” for apparently “tricking” women into not having an abortion and either deciding to raise the baby or put it up for adoption. Apparently, part of the trick is how they provide a multitude of support services and assistive resources to help women, and their families, for whom the pregnancy creates a crisis situation.

Pregnancy centers continue to assist women and their families long after the child is born, when necessary.

Since 2016, “CPCs” are credited with saving the lives of over 800,000 pre-born children.  That’s 800,000 abortions Planned Parenthood didn’t get to perform.  Millions of children have had their lives spared thanks to these centers since 1973.

What this reveals is that people who claim they’re pro-choice are really pro-abortion.  Why would someone who truly believes that women should have the choice to terminate her pregnancy be upset with organizations that help them carry their pregnancy to term?  In the same interview, Warren equated pregnancy centers supporting women who choose to continue their pregnancy with “torture.”  Who knew that letting women know of alternatives was so damaging?

How does this make any sense?  Follow the money.

Roe v. Wade was good for Planned Parenthood’s bottom line.  Now that states can protect unborn children, Planned Parenthood’s potential patient pool just shrunk, dramatically.  Yes, some women will travel for the “right” to kill their unborn children.  Others, however, will turn to these crisis pregnancy centers, making their operations even more important than they already are.  If they’re targeted for disparagement, disapproval and destruction (several have actually been FIREBOMBED since the draft Dobbs opinion was leaked) or are otherwise discredited, then the “demand” for Planned Parenthood’s death inducing services will grow.  For the pro-abortion crowd, the baby in the womb isn’t a unique and individual person whose life should be protected.  It’s a revenue opportunity for their gruesome business; one that just took a body blow from the Court.

Pro-abortion Democrat parties and politicians get a LOT of money from Planned Parenthood.  According to news reports, Planned Parenthood spent over $1 million to elect Maggie Hassan to the US Senate.  The pro-abortion lobby is a major factor in elective politics.  This will only get worse as they bring the battle to states across the nation, especially New Hampshire where they are especially displeased that the state went from having no restrictions on abortion to banning it in the last three months of pregnancy, except when there is a severe fetal deformity that will not allow the baby to live once born.

As senator, I will defend crisis pregnancy centers like the one that operates right here in District 20, in Manchester’s downtown, and do whatever I can to support their good work.  If women have choices, then choosing life should be acceptable to everybody, regardless of their views on this issue