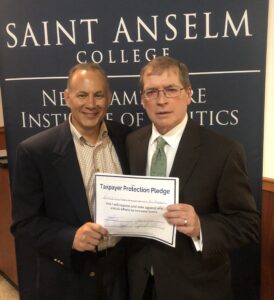 Rich with Grover Norquist from Americans for Tax Reform

At a recent event hosted by the Pine Tree Public Policy Institute, Girard signed a pledge not to raise taxes from Americans for Tax Reform.  The event was headlined by ATR President Grover Norquist, who addressed a standing room only crowd comprised of Republican candidates for office at the New Hampshire Institute of Politics.

Shortly after that event, Girard signed the iconic Taxpayer Pledge from the Coalition of NH Taxpayers.  For years, the pledge has been key to keeping New Hampshire free from a broad-based sales or income tax. 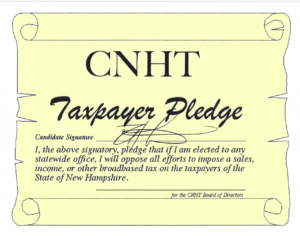 Before signing either pledge, Girard completed a survey from Granite State Taxpayers.  He was one of four candidates for the state senate to earn a perfect score.

“My record is clear.  As an at-Large alderman and school board member, I fought hard to keep spending in check and taxes under control.  I used my radio show, TV show and newspaper columns to advocate for Manchester’s tax cap and pressure politicians to honor it.  I held bureaucrats to account and demanded to see results to justify continued spending.  This stands in stark contrast to Senator Lou D’Allesandro’s long record on spending and taxes.  Over his career, he’s literally voted hundreds of times to raise taxes and spending, including a dizzying number of votes for broad-based sales or income taxes.  His opposition to tax cuts is equally deplorable, even ignoring the revenue increases that have come from recent business tax cuts he vigorously opposed.

“Voters have a clear choice in this election.  With a recession at hand, they can vote for D’Allesandro who will find excuses to increase spending and raise taxes or they can vote for me to hold the line on both.”

Click here to donate so that we can make sure word gets out about the clear choice voters have on taxes and spending in this campaign!