MANCHESTER, NH October 7, 2022–In response to comments made by NH Democratic Party Chair Raymond Buckley, who claimed children would be “kicked out” or “beaten (to death)”  if schools informed parents of their child(ren)’s transgendered behavior in schools, District 20 NH Senate candidate Richard Girard (R-Manchester) issued the following statement:

I cannot find the words to characterize the comments made by Raymond Buckley.  To suggest that parents would abandon, abuse and even murder their child in the depths of a struggle that affects their very identity and existence is beyond despicable.  Moreover, I believe Buckley was being intentionally inflammatory to distract voters from the Democrat’s extreme and extremely unpopular position that parents don’t have a right to know when their children are struggling with such serious mental and emotional issues in school.

Four days ago, via Twitter, I asked Sen. D’Allesandro if he agreed with Buckley’s comments.  As he has yet to reply, I now call on him to repudiate Buckley’s accusatory and defamatory comments about parents.  Also, does he agree that parental rights stop at the schoolhouse door?  Do parents have a right to know what their children are doing while in school?  Should parents be involved in the lives of their children when they’re having serious and difficult personal issues?

Knowing families who’ve encountered this struggle and others whose children have had other mental health issues, I say ‘Yes, absolutely!’  D’Allesandro’s silence says “no” and that’s wrong for families. 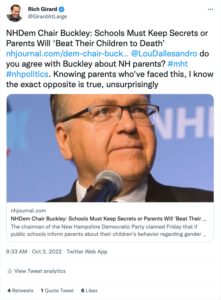